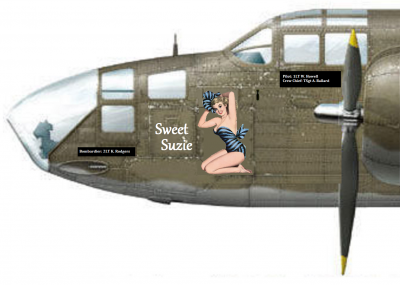 This was not our lucky day. Then again, considering we made it back with our skins intact maybe it was. But it sure didn’t feel like it at the time.

Once again we found ourselves flying flight lead, though with the size of the target we were just one small part of a large formation. Things starting going awry almost from the beginning, with a near collision on takeoff due to someone else not paying attention to the departure schedule.

People still weren’t paying attention and as we headed out over the Channel people started drifting out of position, resulting in a loose formation. At least it wasn’t just my flight. Somehow we managed to link up with our escort and then headed toward France.

Formation Lead got confused and we encountered some Falk as we crossed the French coast south of Ault. A near burst took out a goodly chunk of the rudder. The German gunners must have vectored their airborne cousins onto us because shortly afterward the Luftwaffe came in with a vengeance, Sweet Suzie being targeted by a Bf 109G-6 with plenty of kill marks on his tail. This guy knew what he was doing, coming in low on our 10 O’clock where we couldn’t fire back. Our Little Friends were otherwise occupied so we had no choice but to sit and take it. Jerry hit both engines, taking out the port one while the starboard oil cooling system began streaming black smoke. I tried restarting #1 but it was dead. At least I managed to feather the prop. John (Cpl Maxwell) took a shot at Jerry as he dove away, but missed.

Jerry came back for a second attempt, this time coming in level on the nose. The P-38s were still busy elsewhere and I fired the nose guns but missed. No so Jerry, hitting the windscreen right in front of me. For a moment I thought I’ had it but the plexiglass held. My scare wasn’t near as gerat as Ken’s (2LT Rodgers). Jerry’s big 30mm put a couple rounds into the nose, apparently zipping past either side of Ken’s head. John took another shot and missed as the cocky Kraut flew by. Jerry must’ve run out of ammo as he broke of the attack after that.

With one engine out I had to turn the Flight Lead over to 1LT Blackstum in Randy Rhonda and drop out of formation. I ordered the crew to jettison all non-essential equipment so we could stay up on the one good engine, and dropped to a warmer altitude as we’d lost heat along with the port engine. I turned for home. Fortunately, the Luftwaffe was more interested in the bombers continuing on to the target and we were left alone for the trip back to Chalderton.

The landing was bit touchy with only one engine, but Sweet Suzie lived up to her name and we pulled onto the tarmac where TSgt Ballard’s face said it all. After chiding me about what I’d done to “His airplane,” TSgt Ballard calmed down a bit and promised he’d have her back in flying condition by tomorrow.

And here are the rules questions that arose: