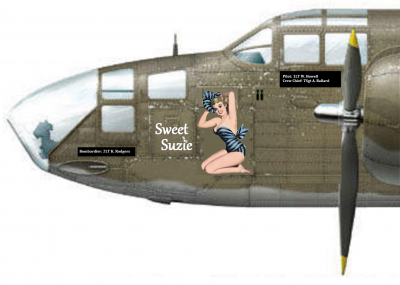 This was it, the big one! The invasion of Europe and we were going to play our part. Of course, no one knew what a roller coaster ride this was going to be.

We were to provide a diversionary attack against some coastal defenses at Trouville in hopes it would draw some of the German forces away from the main landing beaches. At the same time, we were briefed on an alternate target should the boys on the beaches need more direct help.

Takeoff and assembly went well with the Group forming up nicely. We headed out over the Channel, linking up with P-47s from the 367th FG. Everyone was taking this thing seriously, the formation tightening up even more as we continued on across the Channel.

Then, as we were getting ready to form up for the bomb run (given the size of the target the plan was to bomb by flights), the word came from on high to switch to our secondary target. Apparently there were some fortifications on Juno Beach that needed to be neutralized.

Up to now things had been going like clockwork; tight formations, plenty of air cover. But, as we turned onto the new target heading the starboard wing generator started acting up. Still, it wasn’t enough to force us to abort.

Coming up on Juno Beach we could see all the activity below thanks to the weather being even better than forecast. What a show it was! But there was little time for sightseeing, some Krauts needed their day messed up and we were just the ones to do it. With the improved weather, the plan was again altered, we were now going to hit the target from 6,000 Ft. Like I said, this mission was a roller coaster, both emotionally and physically as we made our third altitude adjustment. With all the action, Capt Johnson flying lead got temporarily disoriented, but we were soon back on course. So far the Luftwaffe had been conspicuous by its absence and that didn’t change as we began the bomb run. We ran into medium Flak, weak but accurate. Sweet Suzie took several hits, the most telling being to our port landing gear as we’d later find out. All three flights in our box were right on the money with our bombs. And a good thing it was as the lead box failed to even find the AP!

All the explosions must’ve woken up the German gunners as there was a lot more Flak in the air as we pulled off the target. While it was greater in quantity, it lacked in accuracy and neither we nor anyone else in the formation were hit. Still no EA as we turned for home.

The flight home was pretty uneventful. I guess the lack of targets got to the boys from the 367th as they took off on their own back over the Channel.

Coming in for landing back at Chalderton we learned that the about the damaged port landing gear. Still, I managed to bring her in in on piece. Tony (TSgt Ballard) says he and his boys’ll have Sweet Suzie back in shape in no time. In the meantime, me and the crew are going to celebrate being a part of one of the greatest days in history.