I am developing the Box 1 and 2 add-on, it will most likely be available as a free download. Also, testing the “Bomb Loads” add-on. Two different type of bombs, one type in each box. I think it will be possible to have different types in each flight when bombing by flights but that is nothing I am going to work on.

In the Bomb Loads add on, you have mods on TZ-4 and TZ-5a and some other effects depending on the type of bomb load. You have Fuel Factors if you use the Fuel Consumption add-on. Not done yet with that. In the B-26 you can have bombs in both the main and aft bomb bay, the same type or two different types if you would like. If you have two different types or the same you can make two bomb runs or bomb two targets. If you have the same type you can drop all at once.

Pattern bombing is possible too! More bombs on target but less effective.

And now my mission…

I am in Zone 1 with bad weather. My close escort has not shown up. I stayed one extra turn in the zone to see if they would arrive, but the bad weather is preventing them from either taking off or finding us. I have decided to go on to the target…

In Zone 2, I roll “11” on MT-2 and with modifications, one wave attacks and in this attack my ship is attacked by a veteran pilot in a 190A-6. My ace engineer in the top turret, missed and then this veteran scored a WH-W (walking hits – wings)… 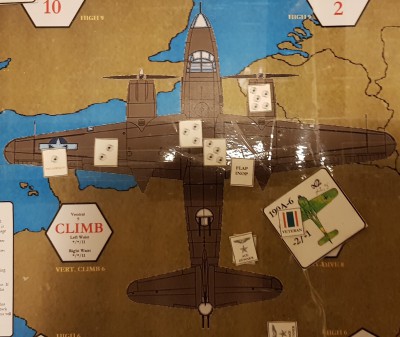 In the Target Zone, in the first wave of three, a persistant 109G-14 made two successive attacks before it left. Three ships in my box have also been hit. Box 2 does not see any fighter attacks.

Flak (Medium guns, alt 7500) for Box 1 is very strong and accurate. Three ships plus mine is hit. I am take three bursts on TZ-3a and take 8 hits. Damage is mostly superficial, but right wing gear door cannot be opened.

Bombing is by flights. Box 1 has 8x300lbs bombs. Lead is poor. I am lead ship in the high flight and am also poor. The low flight cannot identify the aim point but drops on estimation and is 500 feet, good.

Leaving the target, flak for both boxes is very strong, inaccurate. No bombers are damaged in box 2, but two in box 1.

Several fighters attack. Three waves pound box 1 and two box 2. Again, no bomber is damaged in box 2, but a total of five plus mine are damaged. A green 109G-14 attacks from vertical dive. Lightly damaged by the top turret gunner and then when it attacks from 6 high the combined defensive fire by the armorer and engineer drives it off. The armorer in the tail will get the credit for the FBO. (Both gunners hit, SD, but the tail gunner had the highest to hit result on 2D6.) A FW190A-8 comes in from 12 high. This pilot is green. After being lightly damaged by the top turret (I don’t have a flexible nose gun since I have a bomb sight – not in the rules) it scores six hits. An oxygen bottle (no oxygen installed in B-26 but I use the bottles for extra action should a fire occur. I see this as a different type of fire which could burst out) and the tail guns are destroyed. The bombardier in the nose is not happy now and hopes he doesn’t have to bail out because his parachute was hit and is damaged. The other hits were superficial. The 190 makes a successive attack from 6 high but cannot get into a position to fire (Kaczmarek). My engineer hits but there is no effect on the bandit. The radio operator has moved to the waist guns and attempts a passing shot when it dives to a vertical climb position.

We leave the target zone behind but not the enemy fighters. One wave attacks both boxes. This time no bomber is damaged. There are three 109G-6s in the wave attacking my flight which are close enough for my defensive fire. All three are Kaczmarek. The top turret guns jam!

The formation is off course so the lead navigator must check his maps and instruments. He gets the formation back on course and we fly closer to England and over the Channel. We are still in enemy defense areas but they have lost interest in us now.

We reach our station near the coast and all land safely. Because of my jammed gear door I have to make a belly landing. My ship will be repaired in two days.

The total damage on the target (Railroad Bridge & Embankment) is Fair.