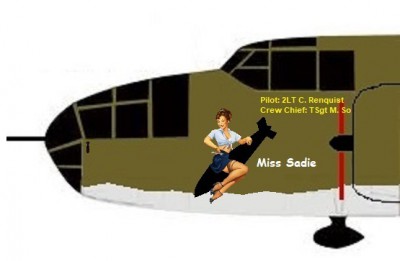 Results: No noticeable Effects on Target

“I thought the Desert was ‘sposed ta be hot,” Sgt Bob Beloit, the crew’s engineer, manages to get out between chattering teeth as the jeep load of men drives across the darkened sand at Maison Blnache.

“It is, durin’ the dah,” intones radio operator Cpl Jeff Wagstrom. “But with no vegetahtion ahn’ no moisture, it don’t retahn heat durin’ the night.”

“No kiddin’!” Beloit shoots back.

For my part, I was more interested in the shadow in the darkness before us taking shape as we drew closer. As the jeep came to a stop a man approached and said, “She’s all prepped and ready, Lieutenant.” The speaker was TSgt Mike Sollon, Miss Sadie’s crew chief and, a career Army man, older than the rest of us.

“Thanks, Sergeant.” I walked past Sollon to examine the B-25 that was to be our home for the next several hours.; had been our home for the past couple of months. Named after my girl back home, Miss Sadie was different now. I found myself momentarily wondering how much Sadie Morgan would change while I was away. Then, my attention returned to the bomber. She was a C model B-25, though TSgt Sollon and his boys had made some changes once we arrived in theater. The troublesome bottom turret was gone, and she sported new guns at her tail and waist. While the added guns were welcome, it would ave been even nicer had they come with an extra gunner. As it was, Sgt Beloit and Cpl Wagstrom would have to divide themselves among the four, including the top turret, gun positions.

“Should we saddle up, skip?” That was 2LT Sandy Hanson, my bombardier/Navigator and a self-described cowboy from Wyoming. I simply nodded, heading for the ladder in the bomb bay, followed by the rest of the boys. “Our first combat mission,” crossed my mind before the mission routine took over.

We were headed to someplace in Tunisia called, Ferryville, in the hopes of catching some U-Boats unawares. The S-3 decided we should go n low, Angels one, to minimize detection and give us a better chance of hitting such small targets. All I could think about was the extra fuel flying so low would eat up. We’d be pushing the limits.

Despite the lousy weather over Maison Blanche takeoff and assembly went well and we assumed our position on the right wing of the lead flight in the three Flight V. I guess everyone was a bit nervous, the Formation tightening up as we headed out over the Mediterranean. We didn’t have to worry about linking up with any escorting fighters, there wouldn’t be any. Somehow I wouldn’t have minded the added complication of making a rendezvous to have some Little Friends along.

Most of the flight to the target was uneventful and it didn’t take long for aircraft to start drifting out o position; not that there was much of a formation to maintain. Despite the absence of enemy activity, the early laxness disappeared and station keeping improved (Zone 4).

Our first encounter with the Luftwaffe occurred we drew nearer Tunisia (Zone 6). While none of the bandits attacked Miss Sadie, one Bf 109F-4 flew close enough to give Sandy (2LT Hanson) a shot, which he promptly missed.

Surprisingly, here were no bandits over the target (Zone 7). However, the FLAK was both strong and accurate. Shrapnel took out the fire extinguisher in the left engine as well as putting a few cracks in the Plexiglas in the nose. I had to remind Sandy (2LT Hanson) about radio discipline over the latter. Though we had no problem IDing the AP, the U-Boats proved to be elusive targets and no one in the Group claimed any hits. At least we didn’t lose any birds either.

Though still strong, the FLAK on target egress was far less accurate and we didn’t take any damage. By now the Luftwaffe had arrived and we found ourselves battling several bandits. First up was another F-4. Jeff (Cpl Wagstrom), jumped to the right waist gun but didn’t have time to line up a shot. The Kraut did better, chewing up the left aileron. After that, Cpl Wagstrom moved to the tail guns, a prescient move as I turned out, the bandit coming back for another pass high on our six. The tail proved no more lucky for Jeff (Cpl Wagstrom), though Sgt Beloit managed to put enough holes in the Kraut to discourage further attacks. Fortunately for us, the Bandit missed.

Then an older model (E-7) 109 came in level off our ten o’clock. Even without the kill marks on his tail, this guy’s approach from a direction we couldn’t hit showed him to be a man of experience – I gained a memento of that experience as hot lead burned through my arm! The ace made a couple more passes before running low on ammo, fuel, or both. While we couldn’t touch him, he only managed to put a few holes in us in non-critical locations.

After that the only enemy we had to fight was our fuel consumption, my co-pilot (2LT Randy Malm) providing steady updates on our dwindling supply. So it was that, despite the lousy weather over Masion Blanche I had no choice but to attempt a landing, the engines coughing out their last gasps as we inelegantly ‘landed.’ To say the least, TSgt Sollon was not happy. Still, Miss Sadie is repairable, as am I.

Here is the die roll-by-die roll for the mission: