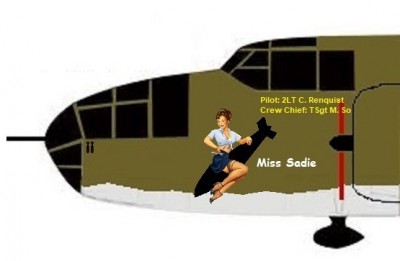 “Take care of him!” 2LT Chuck Renquist responds, hoping he sounds calmer than his radio operator. Beside Renquist, 2LT Randy Malm silently mouths a prayer as the formation fends off more bandits.

While the weather over Maison Blanche (Zone 0) was far from ideal, it presented no real problems as we lifted off and took up our position as Tail-End-Charlie of the lead flight in a three flight Diamond formation. Fortunately the weather quickly improved and by the time we were to rendezvous with our escort (Zone 1) it was CAVU. The boys in the P-38s showed up right on time and we were soon on our way once more to Tunisia.

The clear skies, both in terms of weather and enemy fighters, maintained themselves until we hit the coast of Tunisia (Zone 7) when clouds put in an appearance, as did the Luftwaffe. A pair of Bf 109G-2s came at us, but the Twin-Tailed Devils chased them both off.

As we neared Bizerte (Zone 8) the enemy became a bit more aggressive, two waves contesting our approach to the harbor. First up were a pair of Bf 109F-4s, coming in low on our 5 and slipping past the escort. Cpl Wagstrom raced to the right waist and got off a shot at one of the bandits to no noticeable effect. Not so Jerry. I felt, more than heard, the sickening thud of impacting rounds and then Jeff (Cpl Wagstrom) was on the intercom saying Bob (Sgt Beloit) had been hit bad. There was little enough time to deal with Bob as Jerry came around for another pass. This time luck was on our side as Jerry couldn’t get into a good firing position and sought out a better target. Next an Fw 190A-2 came up from below but couldn’t draw a bead on us. Of course, we couldn’t hit him either. Then the Flak started. It may have been ‘light caliber’ guns put it was very intense, and despite the clouds the German gunners managed to find us; shrapnel putting a few holes in us and shredding the right flap. Lead had no problem ID’ing the AP but his drop was off. Needless to say that meant the rest of us were off too. The second flight did no better, though 2LT Ward leading the third flight got his timing right – I’m sure we’re all going to hear about that at the O Club tonight!

Coming off the Target, Lead took a hard left heading out over the Med. The maneuver managed to avoid any Flak or Bandits.

About halfway back home (Zone 5) and back over Algeria the Luftwaffe gave it one last shot, two waves attacking. Leading off was a Bf 109G-2/R6, the model with the extra gunpods under the wings. Jeff (Cpl Wagstrom), who had been tending to Bob (Sgt Beloit) raced for the guns but wasn’t able to get there in time to fire. Fortunately for us, Jerry couldn’t get into firing position either. By the time the second wave, another pair of Bf 109F-4s came in Jeff had manned the tail guns. Not of much help as the bandits hit us head on, coming in at 12 level and low. I let go with the fixed nose and newly installed package guns at the one bandit while Sandy (2LT Hanson) fired at the other. Neither of us hit, nor did Jerry. One of the bandits came around for a second pass but couldn’t get into firing position and left.

The next challenge was finding our way home. There were a few tense moments as Lead seemed unsure just where we were (Zone 2) until he recognized some feature on the coast, though what there was to recognize is beyond me. Apparently it wasn’t much of a feature as there was still confusion as we neared home (Zone 1). But eventually things got straightened out.

The situation at Maison Blanche (Zone 0) wasn’t all that great, low ceiling and low visibility with rain. But with Bob’s (Sgt Beloit) injuries I decided not to waste time looking for a better landing field. Despite the rain Miss Sadie set herself down nicely and Sgt Beloit was rushed off in an ambulance. Doc says that he’ll recover, but Sgt Beloit won’t be flying anymore. I guess we’ll need a new engineer as TSgt Sollon says he and his boys will have Miss Sadie back in flying condition in no time.