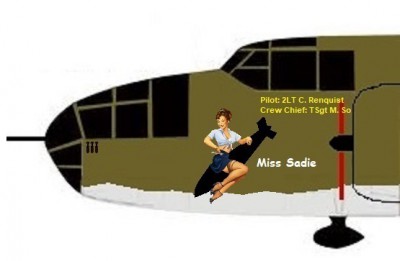 The target was the Marshalling Yard at Gabes, Tunisia. We were going in low in the hopes of avoiding detection. But, at least we had some good escort with us. With fair skies over Maison Blanche takeoff and Assembly went well, Miss Sadie taking the right wing slot in the lead flight of a three element Vee Formation. We would be following another group, though they would break off to hit a different target. Rendezvous with our Little Friend went off like clockwork and I began to think that we had left the gremlins from our last mission behind; wishful thinking as it would turn out.

No sooner (Zone 2) had we linked up with the P-38s then Cpl Wagstrom reported the radio was no longer working. After trying to bring it back into service, without success, Jeff (Cpl Wagstrom) moved back to man the tail guns. We weren’t the only ones to suffer problems, another AC reported difficulties but opted to stay with the Formation (Zone 3 Formation Casualties: NE). After that things settled down for a while.

The skies over Gabes (Zone 9) were cloudy. While it made acquiring the target difficult, it also helped hide our approach, as had coming in low to the deck. We caught the Luftwaffe unawares, facing no EA and the ingress Flak was weak and inaccurate. Of course, it also worked against us, Sandy (2LT Hanson) being unable to ID the AP, each AC making its own bomb run. Still, the rest of the Group managed and we weren’t going to make another pass; due both to not wanting to leave the formation and fuel considerations – Gabes is a long way and low level flying really burns up the avgas! While we missed, the rest of the Group faired better, really clobbering the target.

By now the Germans knew we were there and the Flak coming off the target, though no more accurate than before, was much stronger. With all that lead filling the air we were bound to be hit, and we were. Both the Radio and Nav compartments took hits, fortunately no one was in them at the time. The bigger problem was the fire that erupted in the left main fuel tank. Although the slipstream ended up extinguishing it, we now were hemorrhaging fuel, something we could ill afford. An Fw 190-A3 tried to interfere with our departure but fell to a twin-tailed devil. Then it was heads back home, hopefully.

Our situation continued to worsen as (Zone 8) Lead got his bearings mixed up; more precious fuel expended. Then the intercom went out (Zone 5) and the left engine sputtered to a halt with no more gas. Lead spent more time mucking around trying to get his bearings (Zone 3). By this time it was obvious we weren’t to make it home and I had Sandy (2LT Hanson) start looking for an alternate airfield. He found one (Zone 2) and even though the weather wasn’t the best, we couldn’t afford to spend more time searching for another one. With the Left engine out, neither the left landing gear nor flaps would deploy so I set Miss Sadie down on her belly. It was touch and go, but we made it. TSgt Sollon won’t be happy, but I think she’ll fly again, as will we. Hopefully by then our luck will have changed.