Hit by Flak on Low-Level over Carpiquet. 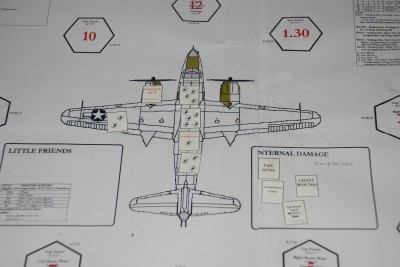 We came in undetected. Flak was weak and inaccurate. The flak gunner’s missed my ship and no other B-26 was shot down. I had 10x 500lbs in two bomb bays, 8 in the main and 2 in the aft. It took a short moment before I decided to drop the two in the aft bomb bay first.

I used an Aimed Attack and hit! Good, that is a +1 mod on LLTZ-6, but flak also hit me and I took many hits! Flak intensity also increased. It was Very strong (light) and accurate now.

The first hit killed my #1 engine, and I think the second destroyed my tail guns. As you see I also took several superficial damage hits, seven in total. My B/N was lightly wounded in the nose – why was he even there? Oh, yes, he is working on the jammed machine gun. It jammed when he fired at a fighter a few minutes before we reached the target. Two waves attacked. A Me109G-6 in the first and a FW190A-6 in the second.

A counter I may have to create is “Navigator’s Equipment.” Please let me know if you have suggestions of any other counters that must be created. I will include formation flying counters again.

My decision now is whether I should try to re-start the engine or use my Lucky Charm (which my crew chief sent with us on this mission only after the excellent preparations on Humdinger Bell-Ringer before the mission) to negate the hit which killed it? If I use it, I can attack again. If the engine re-starts I can attack again. If the engines is still out after the attempt, I must dump my bombs and break off the attack…

Should read “Salvo Entire Bomb Load: If you have four or more bombs you can drop them all at once.”

Avoid flak by flying through the hangar!

I have flown 7-8 low-level formation bombing missions to test the sequence, and it seems to flow well. However, it may be too unbalanced, as it may be too easy to destroy a target and you face very little opposition. (I have lost 4 or or five ships though… during these missions.)

Either I will have to increase flak, delete the +2 (1000-3500 feet) modifier or change the modifiers on LLTZ-6 for formation size. Not sure yet how to make it more balanced.

LLTZ-6: Roll once on LLTZ-6. Use the modifiers you find at the lower part of the table

and don’t forget to add your own result (PLAYER). Flight Size is the size of the strike force

you went out with. Only your own group is included. If you would like to add the result for

the other groups, roll once per group with no modifications, or please feel free to improvise. 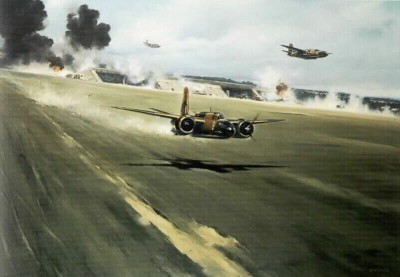 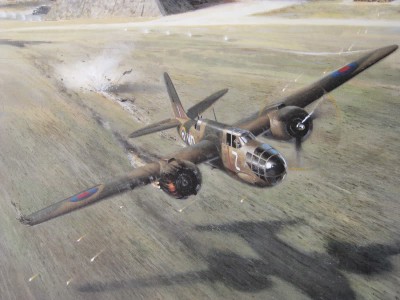 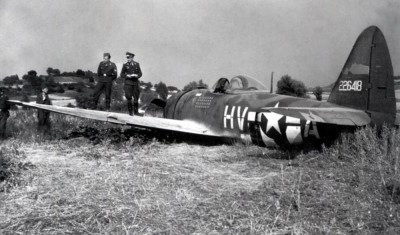 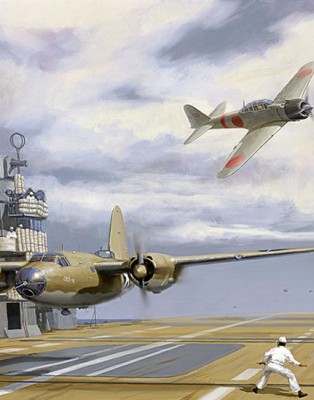 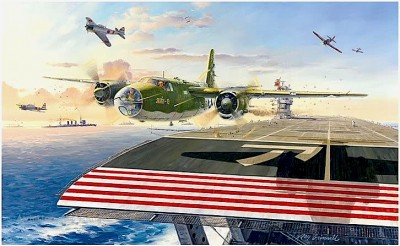 I can really recommend that you keep an eye on your fuel gauge. I had ½ box left after landing. I now cross off boxes after I have landed, not before as I have done on many missions before.

The lower turret was installed and I had wing tanks instead of the aft bomb bay. (I have no photographic of A-26 with wing tanks during WWII.)

My station is Maupertus and the target was Metz, in Zone 7. There are several emergency airfields to land at in France where you can refuel, but don’t let that be a guarantee, because if you are off course or lost, you may not be able to reach any base at all.

I went out with one flight/6 ships. All returned. The result was 65% fair, small target, Fortifications. Flak was +3, but vs the A-26 the intensity was mostly moderate, weak or none and the accuracy fair or inaccurate.

Is the A-26 invincible? You may be shot down if you’re hit, one hit can bring you down, but is the A-26 almost invincible?

I did not use these today (Intensity):
Out of Formation: -2 (because there are many A-26 over the target and the gunners have sevral to choose from and this mod is not applied if you have 6 or fewer ships.)
A-26 Slowed: NE with Water Injection

I was not hit on this mission.